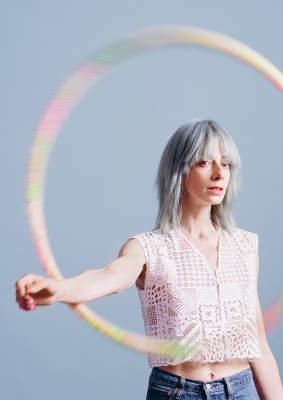 In SHE actress/singer Laurence Roothooft puts herself in the shoes of women who have (had) a profound effect on her. Together with director Suze Milius she pushes her innate transformative urge to the limit.

Laurence basically wonders if she is leading her life in the right persona.
How many roles can you play in life?
What if you played individuals you greatly admire?
Would that be a way of ‘being’ them?

Laurence, as the alter ego of Cardi B, Angela Merkel, Mum Jacqueline, Oprah, Cindy Sherman, her great-great-grandmother, or Grace Jones?

SHE isn’t your run-of-the-mill theatre monologue.
SHE is whirling, musical and dressed whichever way her fancy takes her.
SHE is unforgettable and dazzling.
SHE is moving and probably slightly OTT.

Actress and singer Laurence Roothooft graduated in 2011 at the Toneelacademie Maastricht, after which she did one year at the Rotterdamse Dansacademie. Since then, she has worked with a plethora of theatre makers and directors, both on stage and for television. At KOPERGIETERY she performed in ‘Gran - the Godmother’ and ‘The Daltons’. With her partner Tom Pintens she constitutes the English-language band ELDERS.

Theatre maker Suze Milius studied at Acting International in Paris and trained to be a director at the Toneelacademie Maastricht. She has worked/directed with various Belgian and Dutch theatre companies such as hetpaleis, Het Zuidelijk Toneel, Laika and Het Nieuwstedelijk. Together with Stefan Jakiela she forms the Brussels based arts centre House Crying Yellow Tears. In 2018 she won the Erik Vos prize for outstanding up-and-coming theatre makers.

Jasper Segers is as musician, producer and mixer active in the band 'Jaguar Jaguar' and Sylvie Kreusch. He also works behind the scenes on various projects as a sound wizard. In 2019 he won the prize for 'Young Music' at the Belgian art festival Theater Aan Zee with his solo project Jacobin.