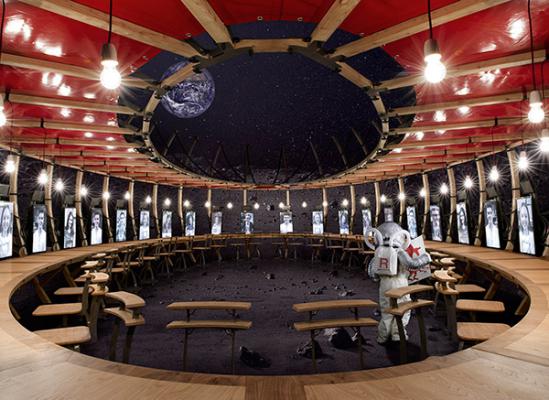 0
Hide tourdates
Uit
In a small, closed community in China parents throw a party when their child is caught telling its first porky. One rule dominates: only lies are to be told. Friends and family come from far and wide and pull out all the stops to come up with the zaniest story about themselves and the world, as if each of them really happened.
Inspired by this anecdote and other incredible stories from throughout the world BERLIN, KOPERGIETRY and HETPALEIS create Remember the dragons…, a performance about truth and fiction for a young audience. As an audience member you are both participant and witness. What makes a good story? What is true and what isn’t?
You take place at a round table. On thirty screens sixty eyes from children from all around the world look at you. A girl in front of you starts telling a story. Another story follows, yet another, and another. Then the whole world appears to gather around the table. The children start talking to one another, each in their own language, and slowly a conversation sets off. Do you believe what’s being told?
Remember the dragons… is a remake for youngsters of the praised BERLINproduction Perhaps all the dragons…
** Adults will experience the performance in a different way than the children.
Why? Because this belongs to this surprising concept!
As an adult, you should therefore bring at least one child. **
PRODUCTION: BERLIN, KOPERGIETERY & HET PALEIS
CONCEPT: BERLIN after ‘Perhaps all the Dragons…’
CREATION: Bart Baele, Yves Degryse, Tom Struyf
RESEARCH: Fien Leysen
MUSIC: Eric Thielemans
CAMERA: Geert De Vleesschauwer
SCENOGRAPHY: BERLIN, Manu Siebens
CONSTRUCTION SCENERY: Manu Siebens, Robrecht Ghesquière, Bregt Janssens, Koen Ghesquière
COPRODUCTION: Rotondes [LU], Tweetakt festival [Utrecht, NL]
BERLIN is een artiste associé in CENTQUATRE [Parijs, FR] en Creative Associate bij deSingel [Antwerpen, BE].